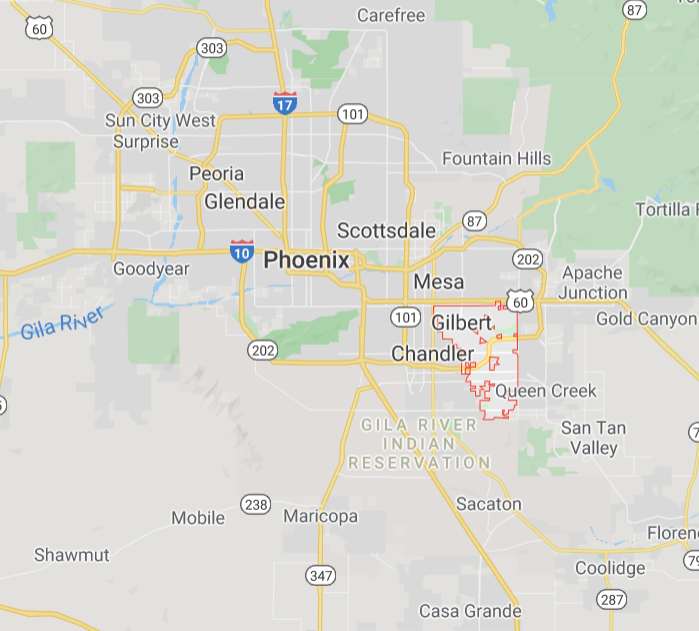 Gilbert is a fast growing town in the Southeast Valley of Phoenix which, at this point, is completely land-locked. It is bordered by Mesa, Chandler, Tempe, Queen Creek, and the Gila River Indian Reservation. Even though it is quite large by population, it never incorporated as a city, limiting its ability to regulate certain types of utilities and some other powers that are reserved in the state for cities.

Gilbert is a fun, young town in the sense that even though it incorporated in 1912, until the population boom of the 80’s and 90’s, it was still primarily dominated by large farms of cotton, hay, cattle, and corn. As the town began to grow, more and more of the farms were turned into neighborhoods, with Gilbert among the fastest growing cities every year from 1990-2003.

Gilbert is full of fun and interesting things to do. Being so old, it has a number of historical buildings, including its well-known water tower at the heart of downtown, although now filled with sand, acts as a central point downtown where concerts are held and a splashpad for kids is a popular attraction in the summer. Gilbert is full of green parks and public places for people of all ages to enjoy, such as the Riparian Preserve at Water Ranch (great for a morning walk or for bird watching, picnicing, fishing) Veterans Oasis Park, Freestone Park, Cosmo Dog Park (the only dog park with a lake for dogs to swim in), Crossroads park (many soccer fields and and ice rink).

Gilbert is well-known for having a lot of things to eat and play at, with a very busy booming downtown area, the envy of some of its neighboring towns.